For the past six months, I've been living through some stressful times. I've worked as staff in the Office of Information Technology Services (OITS) for the past five years in the General Secretariat of the Organization of American States (GS/OAS). The OAS has been squeezed by a fixed budget and is now undergoing service and staff cutbacks. I could see the writing on the wall -- downsizing was coming.

Since March, I've been trying to find another area in the GS/OAS to take me on. At a time of institutional crisis, it's hard to get managers to pull the trigger on bringing in new personnel -- they're concerned about protecting the staff and budget that they already have. This past week, I started work in the Inter-American Drug Abuse Control Commission (CICAD), a policy area within the GS/OAS. I will be the resident writer-editor working directly with the executive secretary and also supporting the communications director.

At one suspenseful moment this past month, I gave up hope and began sending out resumes to other places. But the exercise made me realized that my best fit was CICAD -- my first-hand experience in Latin America, my combined skills of researcher, writer and editor in English and Spanish, my penchant for web technology, all meld together to contribute to making CICAD more efficient and productive. CICAD could also maximize my own potential if the management knows how to get the most out of me. In OITS, I've been glaringly underutilized for the past year, especially after my mentor retired.

The OAS has been the longest stretch of continuous employment in my life. Only during my four years in the Peruvian Times, almost 30 years ago, did I stick with a job this long. I'm not counting my years of "self-employment," freelancing in Peru. Of course, within the OAS I've worn multiple hats (user support, web development, project management, technology pathfinder). Now I've come back to writer.

Rails across the Andes

How the railroads were built in Peru is a fascinating story that is tinged with Indiana Jones-like adventure, geographic challenges, dream-obsessed engineers and human drama. I found some interesting resources on the Web:

I've ridden on my share of trains in Peru. In 1971, I took the train to Huancayo. In 1989 and 1990, I was on the Cusco-Puno train several times. And, of course, I went to Machu Picchu a half dozen times. The old site for the Arequipa-Puno- Cusco service has been replaced by a more polished design and content because it's being managed by an international consortium now. I suspect there is still a local train for the local residents and backpackers. 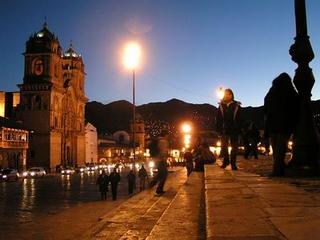 world.techrose.org: Peru: "Where Jesus Never Ruled and other stories from the highlands and lowlands of Peru" Mahesh Shantaram traveled to Peru last year and turned his camera and pen on the country and its people, visiting Lima, Arequipa, Puno, and Cusco. He has a collection of 22 photo essays and over 300 images. Here's how he describes his material:

"Know the true meaning of El Condor Pasa. Get high on Pisco. Save the Ceviche. Spot real Beetles. Experience the City of Kings. Inquire into the Jesus factor. Take the double switchback to Machu Picchu. Walk on the reed islands of Lake Titicaca. Ride the Altiplano. Find love and intrigue in Arequipa. Discover the India connection. Do it all in Peru!"

I commend him for the links that he complements his essays with. I have not seen some of them before and I will probably be highlighting them on their own right in this blog and elsewhere on the site. For those who just want his pix, you can go to his Smugmug portfolio.

Inca Tax Records Were Tied Up in Knots, Study Says

National Geographic News Inca Tax Records Were Tied Up in Knots, Study Says: "To record information, the ancient Inca used enigmatic devices called khipus, mop-like textiles. Made from cotton or animal hair, the objects consisted of multiple knotted strings hanging vertically from a single horizontal string. Khipus were probably used for more than just recording numbers. Some experts say they may have been a medium for recording historical information?possibly as a form of writing. Now a new study shows that khipus were used as documents in a sophisticated accounting system passed up through the Inca bureaucracy."

Khipus are among the most fascinating artifacts of the Inca, and Gary Urton from Harvard University has been among the most dogged investigators into their nature. His latest study has just been published in Science magazine. It's a comparison of 21 khipus.

A change of pace -- resurrecting an old piece

I have added a new contribution to Peruvian Graffiti: The Strange Story of Alberto Pareja Lecaros, the tale of a legendary mine, an eccentric engineer and the madness of a grieved lover. I originally wrote this text in 1983 for La Republica. It was an stimulating experience for me because it was one of my first efforts at writing in a feature style. The material lent itself to breaking out of the news reporting mode. It won a lot of praise from colleagues.

This story is being put up in less than polished prose because I just wanted to get it done -- the page has been sitting on my hard disk for nearly six months. I will be adding some illustrations, cleaning up some overheated sentences and generally reviewing it with 20 years more of writing experience. I had not yet started to work consistently as a freelancer. I also need to recognize that non-Peruvians are going to be reading it -- I wrote it for a general Lima readership.

Newsday.com / AP InterAmerican rights court refuses to reconsider Berenson prison ruling: "Berenson faces 10 more years behind bars, based on time already served. She is scheduled for release in November 2015, a few weeks after her 46th birthday." Her lawyers were apparently asking for a reinterpretation of their ruling. Lori probably has little recourse but to serve out her sentence or hope that President Toledo or his sucessor in the presidency takes pity and pardon her.

Forced from the land

Global IDP Database Internally Displaced Populations in Peru: "Most affected by the political violence were indigenous peasant communities living in the Andean and Amazonic regions, in particular in the department of Ayacucho. It is believed that all but 60,000 internally displaced people (IDPs) have returned or decided to permanently settle in their current locations, but most still live in precarious conditions, receiving no or only very limited assistance from the government." This project sponsored by the Norweigan Refugee Council has a country profile as well as several reports about Peruvian IDPs. A map, taken from Ideele magazine (1991), captures the flow of populations. The reports are available in English and Spanish.

Ayacucho the city was impressive because it ballooned in size during the war because peasants fled the countryside. Entire villages disappeared. Refugees lived in basements for weeks, afraid to come out for fear of being seen by the Peruvian military, the police or Sendero.

And when the the provincial cities could hold no more, the refugees fled to Lima. It was an intriguing -- and painful -- movement of people. Part of the the relief of peace has been the return of a large share of the refugees to their homeland, their fields and communities. I have only seen glimpses of that story since I left Peru in early 1996.

Let me slip you another lost Peruvian gem on the web: The Internet, inequality and exclusion in Peru: the social impact of the cabinas públicas by Victoria Holmes. It is in Adobe Acrobat pdf format, weighs in at 304 kilobytes and runs 35 pages. It's from an August 2001 presentations so it may not be completely current. You can add it to the other resources on my Peru/Internet page. It seems that cybercafes have replaced the "chino de la esquina" (the corner grocer) because they seem to be everywhere, serving up hot e-mail and well-seasoned Internet telephony services.

I found this document in the CyberLibrary of the Networks-and-Development-Foundation, located in the Domincan Republic. It hosts a lot of websites that deal with technology and development.

Wikipedia, the free encyclopedia has an exceptionally good biography of Abimael Guzmán, the founder of Sendero Luminoso. I had not seen anything as detailed online. There is also a good entry for Shining Path. It made me want to enlist on the service just to see who was writing behind the scenes. The Guzman entry does link to my own Sendero Files.

While reviewing my server logs today, I ran across a site that I had not noticed linking to me before, ExpatPeru.com. It promises to be "a site designed to serve the English-speaking community of foreign residents in Peru and for others who are planning to relocate here" (in Peru) with news, community and resources. I will be adding the site to the Lista directory. It lists my blog as a commentary source. It has an active online forum so people who want to ask questions can query sources who actually live in Peru, instead of me who has been back only once in 10 years.

Actually the site that links to me most (not counting Google) happens to be RedForum, which happens to be in French. From the red and black motif on the site, it seems to be a left wing political site. Since I can't trace the link back to its source, I can't tell what they are actually referencing.

Building towards the future

I've been exploring development-oriented websites recently and came across Chemonics International, a consulting firm focused on the developing world. It's a subcontractor for the US Aagency for Internacional Development and multilateral organizations. It had four articles on its recent work in Peru so I am going to point to them here:
Obviously, these are articles meant to underscore Chemonics' expertise and track record, as well as to spotlight its underwriters, in this case, US AID. But it also shows the kind of work going on in the country from a development point of view. Here is AID's own Peru section and the country mission's site.

Many may complain about the US policy slant and the distortions that it can create in development strategy and economic performance. But the reality is that because of the commitment made to Iraq and the "war on terrorism," the US impact on Peru will be steadily declining for the next five years, if not longer.