So you want to be a foreign correspondent

Once in a while, I'll get an e-mail from a writer or journalist thinking about going off to South America for the adventure of becoming a freelance journalist, as if my experience from 25 years ago in Peru could still be relevant. I would recommend that anyone looking at that prospect check out Life as a Foreign Journalist on Cliff's blog. Cliff has been working out of Peru for the past year or so, and I've cited his articles and blog here several times. He gives a realistic assessment of some of the obstacles to making do as an overseas reporter all on his/her own. He also points to this article in Editor and Publisher.

I used to work as a fixer for a lot of outlets. One of the advantages of setting up appointments and even attending interviews is that the prestige of the big-name publication would rub off on me and allow me greater access the next time I called the source.

I just found Karl Grobl's photography site with some stunning pictures of Cusco and Machu Picchu taken in 1998 and 2001. Karl is a photojournalist who has gone round the world more than a few times.

A visit to Machu Picchu 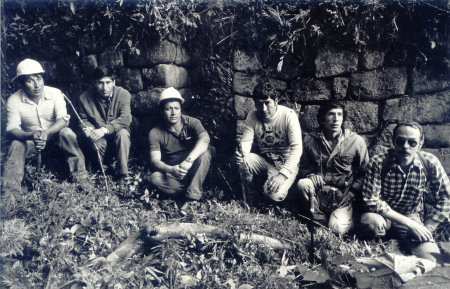 In 1984, Newsweek had me rush up to Cusco because a news wire story had reported that a sister city to Machu Picchu had been found nearby. I went up with a freelance photographer, Greg Smith (no relation). Well, it turned out that the site was not a "twin city" but part of the scores of ruins that lie on the slopes along the Inca Trail leading up to Machu Picchu. The Peruvian archaeologist and curator of the Machu Picchu (third from the right in the photo above) confirmed that previously the extend of the "new" site's ruins had not been know and took us there. It was about two hours outside of the main ruins. It was a bunch of terracing and storage structures, some with ceremonial functions.

In the picture above, I'm posing (on the far right) with the "expedition crew" after we performed a ritual of offering pisco and coca leaves to the spirits of the ruins. The crew worked up a good sweat cutting through the overgrowth to get us to some of the most visible terracing.

I eventually published a short piece, playing down the twin city part but tried to emphasize the archaeological importance of the site. I've since lost that article, so you'll have to take my word for it.

For that matter, every couple of years, a news story will come out of Cusco about more "discoveries" of "new ruins" or another "Lost City of the Inca." These stories usually appear when a TV crew has been up in the area filming a feature for PBS or the History Channel or something like that. Local residents always know about the existence of pre-Columbian sites, but not all of them have been surveyed, must less excavated. Most sites have already been looted too.

My reporting visit was a great chance to spend the night at the Machu Picchu holel on Newsweek's tab, and we got to see the sun set and rise at the top of the ruins. Most of my visits were day trips: I had gone there in 1971 during my first visit to Peru, a third time with the Katharin Graham visit to Peru in 1985, a fourth time in 1986 when I was helping ABC film the Shirley McLaine bio-pic, "Out on a Limb," and a fifth time for an Australian television feature team in 1987.

I came across this photo, taken by Greg Smith, while cleaning out a filing cabinet with old material. It brought back a lot of memories.

For those in the Washington, DC area, the Andean Seminar is offering a talk about the Peruvian elections next year:

On behalf of The George Washington University Seminars on Andean Culture and Politics, we invite you to join us for the seminar, ?Peru?s Relationship with Chile and Bolivia and the Implications for Peru?s 2006 Elections?, featuring Ambassador Fernando de la Flor Arbulú and retired General Jaime Salinas Sedó.

The seminar will take place on Tuesday, December 13, 2005, from 12:15pm to 1:45pm in room 211 of the Elliot School of International Affairs, located at 1957 E St., N.W. Refreshments and cookies will be provided, but please feel free to bring your own lunch.

-- Ambassador Fernando de la Flor Arbulú is Peru?s Ambassador to the Organization of American States. Previously, he served as Legal Advisor in the Presidential Office in Lima and as Secretary General to the Presidency of Peru. In the 1990s, he was a member of the Executive Council of Peru?s Foro Democrático. Ambassador de la Flor received his law degree from the Catholic University in Peru.

-- Jaime Salinas is a retired General of the Peruvian Army. He was a commander of the second military district in Lima, and worked against the consolidation of the Fujimori regime after the 1992 autogolpe. He was also founder and head of a Lima NGO focusing on the geopolitics of Peru, and is currently an advisor to the Peruvian Mission to the Organization of American States.

We hope that you can attend; if so, please RSVP to [email protected], giving your name, title, and organizational affiliation.

Visitor parking will be available at the GW Parking Garage located at 800 21st St. (entrance on H St. between 21st and 22nd Streets).

Since I have finished with my most pressing work this year at CICAD, I may be able to attend.

Coca Photo Exhibition - 27 original pictures with text in English, Spanish and French. The valley has a lot of legitimate growers that sell their production to the state monopoly, ENACO, for traditional chewing and ceremonial use, as well as consumer items like tea or tooth paste.