A wedding in the family 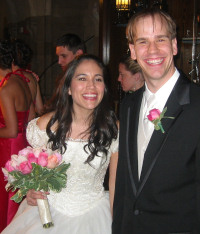 Last weekend, my family and I went up to New York City to attend the wedding of a niece, Ana Lucia Torres, so it was a big family affair. She married Paul Dunkle, a guy that she met shortly after graduating from Hofstra University. Their wedding was at Riverside Church, which proved to be a striking stage for their ceremony, reception and dinner.

The occassion brought together relatives and friends from the far corners of the continent -- from Peru, Uruguay, Canada and the boroughs and suburbs of NYC, as well as upstate New York. Ana Lucia's parents, Teresa's sister Gloria and Mario Torres, reside in Ottawa Canada. We brought the matriach, Maria Luisa, up from Peru so that she could see another granddaughter exchange vows. And then a whole slew of second and third cousins appear ed seemingly from nowhere. Paul's family comes from Elmira, New York, not far from where my dad's family calls home, which can be almost as culturally distinct from NYC as Peru. Paul's family stir center their lives on farming.

I will repeat here what I told Ana Lucia, Paul and her parents the following morning when we were sharing breakfast at the hotel: 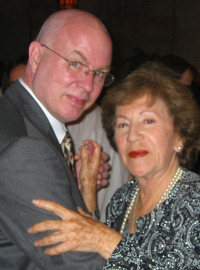 Maria Luisa and I dare to dance.

You can tell the humnan quality of the bride and groom by the people that they assemble to stage their wedding -- the photographer was spontaneous, but professional. I learned that she actually was not a wedding photographer, per se, and you could tell she was concentrating on capturing the cusp of the moment, rather than posing the participants.

The bartender was a chatty guy who shared recipes and chat as he poured out the spirits. The waiting staff was cordial and helpful. The wedding support staff at Riverside Church came to the rescue when Ana Lucia and entourage found out that street fairs had clogged midtown Manhattan and threw off all transport schedules so the wedding party ended up going straight to the church.

The musical band -- something called Swingadelic, Baby! -- was a masterstroke because it was clear that they enjoyed playing together, whether it was a jam session or a wedding. I found myself either being drawn into their jazz riffs or dancing to the rock tunes.

Ana Lucia and Paul flew off to Tahiti for a 10-day honeymoon and to rest up from the months put into preparing the wedding. A rest well-deserved and time well-spent. It's clear that they wanted to make the wedding a memorable milestone in their marriage and the wider family's memory.

A bevy of cousins and second cousins gather for a picture with the bride. My daughter, Stephanie, is the second from the right. 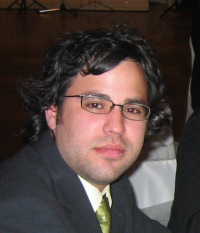 Matthew, my son, has confessed that
he has no immediate plans for marriage. 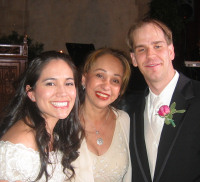 Ana Luica and Paul share a moment
with Teresa, my wife.

Alan with a 14 point lead

In the first opinion polls of the presidential run-off race, Alan Garcia has 57 percent and Ollanta Humala has 43 percent, according to the Apoyo polling agency. Humala is much stronger in provinces than in Lima. In a telling sidelight, 14 percent of those interviewed said that they would vote black or invalid, while 7 percent did not express a preference. Those votes may hide additional votes for Humala. See this El Comercio story for details. In English, Bloomberg , MercoPress and Indian Country Today.

The second round will be held on June 4.

We will now have a presidential run-off elections between Ollanta Humala and Alan Garcia. Both have a tainted personal history -- the first as a military frontline commander in the Huallaga valley who in all likelihood commited or condoned human rights abuses, and the second as a young politician who wasted a historial opportunity to consolidate democracy in the country.

Pick the lesser of two evils -- it would have to be Garcia. Although I have been especially critical of Garcia's first term in office, I still see him as capable of managing government -- just as long as he takes his meds. You could even argue that the guy may actually have learned from his mistakes. These days he looks so tame compared to Venezuelan president Hugo Chavez or Bolivian president Evo Morales. Of course, the deepest fear is whether the APRA part can be kept on a tight leash and not fall back into the pattern of corruption and incompetence that tainted the 1985-1990 term in power.

Mitch Teplitsky's Soy Andina: "Soy Andina is an exuberant cross-cultural road trip, bursting with traditional music and dance rarely seen outside the country. But the core story is intimate and universal: a yearning for roots and connection in turbulent times." Mitch has been working on this documentary for years, a real labor of love for Peru and its people. I can't even remember when I first chances across his site. I think I posted something about his work. He tells me that he's on the home stretch for completing the film.