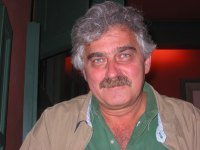 In the late 1960s, Mirko was pegged as a prodigy. Besides being brilliant, he was handsome and a surfer. Five years after translating his poems, I had a chance to work with him on La Republica in 1982. We co-wrote a daily page of political analysis for six months. We were a kind of Woodward-and-Bernstein of Peruvian journalism. I have never met anyone who could write more quickly and stylishly under a deadline. He would type out the story in one draft and then merely add a coma or two.

He's also a writer of detective novels, literary criticism and is now a political commentarist for La Republica. He is also the ego behind Mosca Azul, the book publisher. Hueso Humero has been one of the best literary magazines in Latin America for decades.

I am sure he wrote his poems with more than one draft.