Accomplishments of the April 2001 Quebec City Summit of the Americas

The U.S. account of the Summit of the Americas is pretty self-serving. To start, it does not mention the Organization of American States, under whose auspices most of the accomplishments took place. But it does provide specifics about the actions of the past two years.

At the Summit of the Americas in Quebec City, heads of state from across the hemisphere pledged to strengthen democracy, advance economic prosperity, and expand the benefits of globalization. The United States is committed to meeting this pledge. Since the conclusion of the Summit in April 2001, the United States has established and supported an array of initiatives in accordance with the Summit of the Americas action plan. A sample of these initiatives is included below:

-- On Sept. 11th 2001, Secretary of State Colin Powell and other foreign ministers signed the Inter-American Democratic Charter. Through this charter, 34 nations of the Americas acknowledged the essential elements of democracy and committed themselves to practice, protect and promote its principles.

-- The U.S. continues to push forward with the FTAA negotiations, which are scheduled for conclusion by January 2005. The FTAA was originally proposed at the Miami Summit of the Americas in 1994.

-- The U.S. and 31 other states signed the Inter-American Convention against Terrorism. This convention is ensuring greater regional cooperation on financial and border controls in the fight against terrorism. 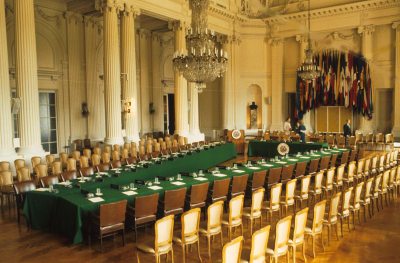 Hall of the Americas at the OAS Main Building in Washington, DC.

-- The Summit process led to the Inter-American Convention against Corruption and its 2001 Follow Up Mechanism, as well as the Mutual Evaluation Mechanism that seeks to ensure compliance with the convention.

-- Since the Quebec Summit of the Americas, the U.S. has concluded agreements with El Salvador, Belize, and Peru under the Tropical Forest Conservation Act. These agreements provide debt cancellation in exchange for protection of tropical forest areas.

-- President George W. Bush launched the Inter-American E-Business Fellowship Program at the Quebec Summit to train Latin American and Caribbean information technology leaders on how to use e-business. The program is now in its second year of training.

-- At the Quebec Summit, President George W. Bush announced the establishment of regional Centers for Excellence in Teacher Training, which provide training in reading instruction and school administration. USAID has been working with the Department of education and regional education experts to develop three centers in the Caribbean, Central America, and the Andean region, which will be operational by the end of 2003.

-- In September 2002, the U.S. participated in the first hemisphere-wide conference on Corporate Social Responsibility. Over 500 representatives from business, civil society, government, multilateral organizations, and the media gathered to discuss the benefits of corporate social responsibility and to explore opportunities for partnerships among different sectors of society.

-- The U.S. co-sponsored a major hemispheric conference on disaster risk reduction in December 2001 that brought together disaster relief experts, members of civil society, insurance companies, government agencies and donors. In this unprecedented meeting, participants created a plan for mitigating the impacts of natural hazards and improving reconstruction efforts.

-- President George W. Bush announced the American Fellows Program at the Quebec Summit, in order to promote excellence in government through the exchange of government personnel. Some exchanges have already begun, and 20 to 50 Fellows are expected for fiscal year 2003.