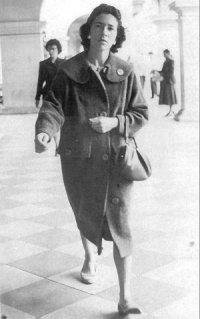 Luisa is my wife's mother. Her closest friends call her Celeste. She was born in Arequipa into a large family. Her childhood was shaped by the death of her mother.

The picture (to the right) seems to capture Luisa's character -- determined, single-minded and focused. She endured a lot of hardship to raise four daughters -- three of whom graduated from college. The picture was taken in the Plaza de Armas of Lima, probably on her way to the Central Post Office. She was employed by the Peruvian Postal Service for many years.

Luisa married at a young age and, as was common in those days, got saddled with children. Jorge, Luisa's husband and Teresa's father, failed to provide for the family. In fact, he managed to lose a fairly large endowment, including properties in Arequipa and PUno. Luisa had to start working to put food on the table.

Divorce was not a socially acceptable option in the 1960s and 70s in Lima. Luisa and Jorge separated. After that, Luisa always had to sustain the family. After working at the Post Office for a while, she transferred to the National Council of Justice, a review board for judges and prospecutors that the military government set up in the early 1970s. Luisa still has the orange 1973 VW Bug that she bought in those bonaza times. The car was treated like a family heirloom.

I met Luisa in December 1972 when I started going with Teresa. Our first Christmas together in the big house in San Miguel was memorable. When I came back in 1974, Luisa loaned me an apartment to get settled. After Tere and I married, I moved in with the family. In 1977, Tere and I bought our place in in Aurora, Miralfores. A few years later, Luisa bought the duplex twin of our house. Her presence meant that the Chavez-Carrasco family tended to center its activities around Genaro Castro Iglesias 273-275.

In the 1980, Luisa became an advertising sales person for the Peruvian Times where I worked and then for a tourism publication.

Now Luisa has retired, though she is renting out rooms in her home to touists. If you'd like a quiet place in Miralfores, let me

directly. If you want more information, you can check out her Bed and Breakfast page.