Profession, family, place and circumstances are among the main factors that define a person. I will be exploring here how they are woven together into a life. For a more formal accounting of my career, look at my résumé.

I have been a journalist and writer since the late 1970s when I walked in the Lima, Peru office of an English-language weekly and offered my services. Before, writing had only been a hobby since a poet rarely makes a living off his or her work. The apprenticeship of journalism was a defining experience of my life. Although I may never file another story or sell another article, I will always consider myself a writer because it defines the way I think. I am a writer because writing lies at the core of my thinking process.

To prove my point, my new career incarnation as a web developer and information technology geek is based on my ability to write, rather than graphic design or programming skills. Others may bring stronger technical powers, but I bring words, sentences and meaning to the screen.

I married Maria Teresa Chavez-Delgado in 1974. Teresa started out studying law in Lima, Peru. She has a six-year degree from the Catholic University of Peru to prove it. She even worked as a law clerk for the Peruvian navy, prosecuting deserters and draft dodgers, but she never took her bar exams. That's because she got married and had a couple of children. Once the kids got old enough to give her free time, she discovered a second calling -- art. She started oil painting as a hobby but found it more than a pastime. She's been fortunate to have good teachers and a husband willing to talk about composition and hues late into the evening. She has participated in more than a dozen collective exhibits in Peru, but never had the chance to do an individual. She recently participated in a collective exhibit at the Peruvian Embassy in Washington, DC. 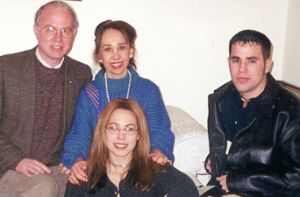 In all honesty, Teresa's real career was raising our two children, who now would both like to see her go into retirement. Stephanie is a 30-year-old who spent here first two years of school at Bard College in New York. A bubbling personality and robust beauty, she has keep us in awe of her ambitious goals and drive to achieve them. She finished her university studies at the University of Maryland at College Park, majoring in History and Political Science. She is now working in the Washington headquarters of the International Brotherhood of Teamsters (IBT) in their organizing efforts. They appreciate her bilingual skills.

Twenty-eight years old, Matthew graduated from George Washington University majoring in geography . Matt has a personal discipline and commonsense vision that set him apart. He graduated from the University of Maryland with a Masters in Geography in June 2005. He is working on a NASA-funded project Global Land Cover Facility with remote imaging technology.

During the tough times financially after we returned from Peru in 1996, Stephanie and Matthew lent their shoulders to carrying the load by returning home and putting their biggest dreams on hold, working full time till we got back on our feet.

My father was a Protestant minister. He pastored only three churches during his career, unusually long terms of service. My mother served as his choir director, secretary and cheerleader. The two brothers and a sister revolved around his ministry and the church. As preacher's kids, we made four or five weekly visits to church. This strong religious upbringing influenced -- and influences -- many of my decisions: the choice of my college (a Midwestern college supported by my parents' denomination and their alma mater), the connection between a profession and a calling, and my rebellious departure from home and going abroad to gain a distinctive experience.

Peru was where I ran away to after finishing college, with short stops in Texas, Arizona and Mexico. I grew into maturity emotionally, professionally and creatively in Peru. A first, brief visit (Amazon rain forests, Lima, Machu Picchu and diarrhea in three weeks) during my junior year in college had led to a return adventure of five months in my last year of college (1971). I studied at the Catholic University for a semester. That stay gave me another reason to come back again, for Teresa and an extended residence that stretched on for nearly two decades.

Each time I thought that I had reached the end of my term in Peru, another challenge arose to make me stay on: the chance to be a reporter (1978), the opportunity to be a free-lance correspondent (1983), the opening to do in-depth research and write a book (1987), to work in an international organizaiton (1993-95). Finally, in 1996, I came back to the States for good.

Why Peru and for so long? I have often been asked those questions and the answers are just as revealing about the country as they are about my personality.

I am still dealing with the country. This website has been an occassion for working through memories, dilemmas and prospects of Peru. I have surprised myself by what a rewarding exercise it has been. In part, because those 18 years in Peru left me with a motherlode of material to work with. My most recent trip back was in October 2002.